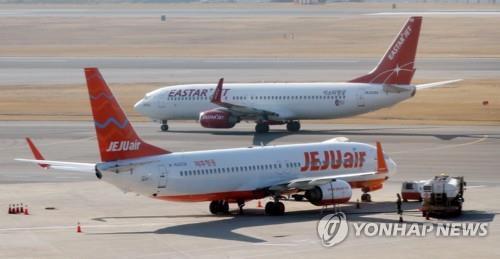 In March, Jeju Air signed a deal to acquire a controlling 51.17 percent stake in Eastar Jet from its parent Eastar Holdings Inc. for 54.5 billion won (US$45 million) as part of its expansion strategy despite the growing COVID-19 pandemic’s impact on the airline industry.

Eastar Jet suspended all of its flights in late March, and its 1,700 employees went on “paid leave at the request of Jeju Air,” an Eastar Jet official told Yonhap News Agency over the phone.’

“Jeju Air said it will guarantee wages for Eastar employees after the signing, but they changed words in May with the worsening coronavirus crisis. Unpaid wages for Eastar workers reach about 24 billion won,” the official said.

But Jeju Air balked at Eastar’s argument, claiming that the Eastar’s management made the decision to halt all flights and sent its employees home without paying wages.

“Eastar began to delay making payments to its partner companies at airports and oil suppliers in December. The subcontractors and refiners notified that they won’t work with Eastar any longer in late March,” a Jeju Air spokesman said.

The tit-for-tat argument between the two low-cost carriers has brought Jeju Air’s acquisition of Eastar Jet to a halt for now.

Jeju Air has been widely expected to complete the deal by the end of this month because the country’s biggest budget carrier said in April it will issue 10 billion won worth of convertible bonds on June 30, one of the prerequisites for the takeover.

Eastar Holdings plans to purchase the convertible bonds once issued, and the bonds can be converted into Jeju Air equities.

But it remains to be seen whether Jeju Air can issue the convertible bonds as announced.

To wrap up the deal, Jeju Air has to obtain an approval from Vietnam and Thailand, which are still reviewing the proposed takeover.

Asked about a possible collapse of the deal, Jeju Air said, “We will proceed with the deal.”

Jeju Air has said the acquisition will help it gain a bigger market share and strengthen the company’s competitiveness in global markets.