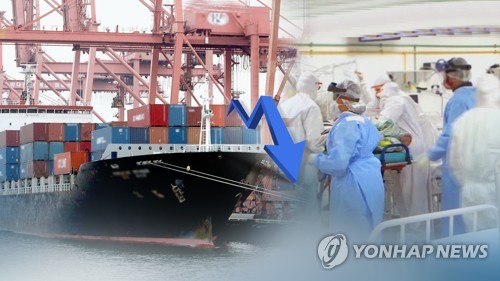 Outbound shipments came to US$39.2 billion last month, compared with $44 billion posted a year earlier, according to the data compiled by the Ministry of Trade, Industry and Energy.

The June tally marked the fourth straight month that the country’s exports declined.

Imports also surrendered 11.4 percent to $35.5 billion, resulting in a trade surplus of $3.67 billion. The country snapped its 98 straight months of having more exports than imports in April, before rebounding to the black in May.

The June decline was roughly in line with what the market had expected. According to a poll by Yonhap Infomax, the financial arm of Yonhap News Agency, the country’s June exports were estimated to have declined by 9 percent compared with a year earlier.

Before the new coronavirus delivered a full-fledged impact on the global economy, South Korea enjoyed a 4.5 percent rise in its outbound shipments in February, the first on-year rebound in 14 months.

But the country’s outbound shipments declined in March, and its pace further accelerated, plunging 25.5 percent in April and 23.6 percent in May as major trade partners closed their borders and suspended business activities.

South Korea’s exports dipped by more than 10 percent in 2019 due to lower chip prices and the trade war between the United States and China.

Hit by a slump in exports and facility investment, Asia’s fourth-largest economy is expected to contract 1.2 percent this year, according to the Organization for Economic Cooperation and Development (OECD).

The updated prediction, which would be the sharpest contraction since the 1998 Asian financial crisis, marked a sharp downgrade from the OECD’s March forecast of a 2 percent expansion.

The country has been considered one of the most successful countries in containing the spread of the highly infectious disease, although recent sporadic group infections have been popping up in greater Seoul, with around 12,800 COVID-19 patients reported here so far since Jan. 20.