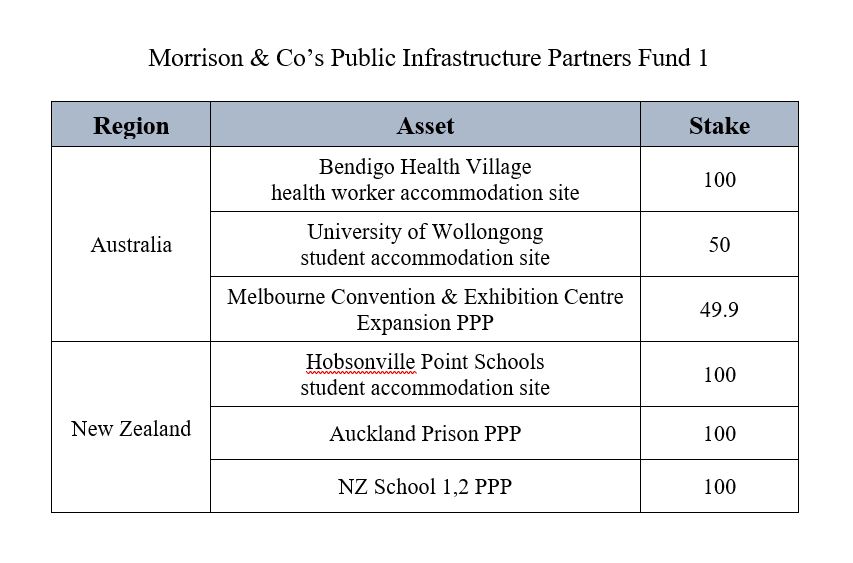 The Public Infrastructure Partners (PIP) Fund owns equity stakes in Public Private Partnerships (PPP) assets across Australia and New Zealand, including the University of Wollongong student accommodation site, Melbourne Convention and Exhibition Centre and Auckland Prison. Industry watchers are paying attention to the deal as most Korean investors have halted alternative investments due to Covid-19.

According to investment banking industry sources, Morrison & Co chose a consortium of NH Investment & Securities and Korea Development Bank Infrastructure Investments Asset Management Co Ltd (KIAMCO) as the preferred bidder for the deal. The fund can be worth up to $400 million.

The PIP fund, now reached maturity, was established in 2009 as a vehicle to invest in PPP assets in Australia and New Zealand. The portfolio includes the University of Wollongong student accommodation site, Melbourne Convention and Exhibition Centre Expansion PPP and Bendigo Health Village in Australia, and Hobsonville Point Schools PPP, Auckland Prison PPP, and NZ Schools I and II PPP in New Zealand. Most assets have an initial lease term or concession life of 25 to 34 years remaining with the governments.

NH Investment & Securities need permissions from the Australian and New Zealand governments to close the deal. An alternative investment industry source said that there will be no big problem as the consortium has fully explained the legitimacy of the acquisition. NH consortium is making a bold bet on this relatively stable infrastructure asset as core or core-plus strategy is not making enough profit amid a sharp drop in office demand due to Covid-19. (Reporting by Hyewon Chang)