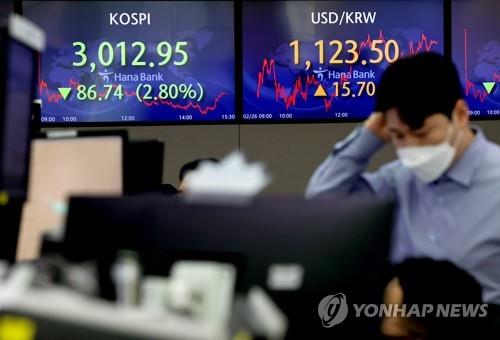 SEOUL, Feb. 26 (Yonhap) — South Korean stocks dipped nearly 3 percent Friday on the back of an overnight Wall Street plunge that was spurred by a bond yield hike. The Korean won fell against the U.S. dollar.

Trading volume was high at about 1.3 billion shares worth some 21 trillion won (US$18.7 billion), with losers outnumbering gainers 729 to 153.

Stocks tumbled with the opening bell as investor worries grew globally over post-pandemic inflation, heralded by a bond yield hike.

The local currency closed at 1,123.5 won against the U.S. dollar, down 15.7 won from the previous session’s close.

Local stock markets will be closed Monday for the March 1 Independence Movement against Japan, which ruled the Korean Peninsula from 1910-45.