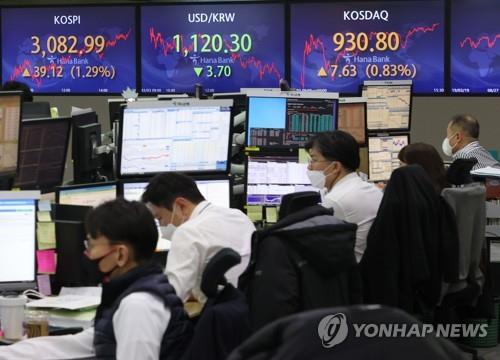 Trading volume was moderate at about 2.2 billion shares worth some 13.9 trillion won (US$12.4 billion), with gainers outnumbering losers 655 to 206.

Gains accelerated in the afternoon, led by strong gains by steel and tech stocks.

“Investors’ optimism seems to have increased (after Guo’s soothing comment) that (Chinese) regulations would not be so strong as to hinder the economy,” he said.

The local currency closed at 1,120.3 won against the U.S. dollar, up 3.7 won from the previous session’s close.

Bond prices, which move inversely to yields, closed higher. The yield on three-year Treasurys lost 0.2 basis point to 1.019 percent, and the return on the benchmark five-year government bond fell 2.7 basis points to 1.423 percent.