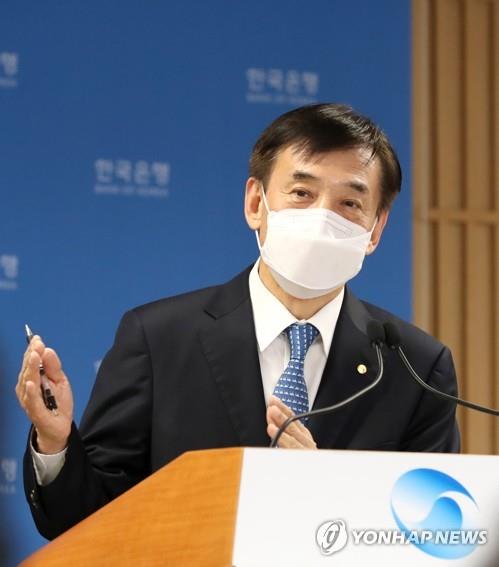 SEOUL, March 24 (Yonhap) — South Korea’s economy is expected to recover from the COVID-19 pandemic at a faster pace than expected this year as the U.S. economic recovery gathers steam, the head of the Bank of Korea (BOK) said Wednesday.

BOK Gov. Lee Ju-yeol, however, said the central bank has no plan to normalize its monetary policy earlier than anticipated, even though the nation’s economy is predicted to grow at a faster pace in 2021.

His remarks came as U.S. President Joe Biden’s US$1.9 trillion aid package is expected to fuel a strong U.S. economic recovery this year, while other major economies maintain their expansionary macroeconomic policies.

“So, the pace of growth in exports and facility investment for the nation’s economy is expected to be higher than previously anticipated,” Lee said at a question-and-answer session with reporters.

Earlier this month, the government proposed an extra budget of 15 trillion won ($13.3 billion) to finance another round of relief aid for smaller merchants and the underprivileged hit hard by the pandemic.

The extra budget, the third-largest ever, will be used to fund the 19.5 trillion-won relief aid package, the fourth of its kind, designed to help ease economic pains caused by the pandemic.

If the extra budget is approved, it would also help South Korea raise this year’s growth rate, Lee said.

“Given these conditions at home and abroad, this year’s growth rate is expected to be higher than the current outlook,” he said.

The BOK kept the nation’s 2021 growth outlook at 3 percent in its latest update.

Asked whether the BOK could dial back its loose monetary policy earlier than expected, given the possibility of raising this year’s growth outlook and inflation worries, Lee replied, “It is not the time to hastily adjust the trend of monetary policy.”

“It is difficult to say that the nation’s economy returns to a normal track after getting over the COVID-19 shock,” Lee said.

The growth of the nation’s consumer prices is likely to temporarily pick up in the second quarter, affected by hikes in food and oil prices, he added.

Consumer prices climbed 1.1 percent on-year in February on a rise in prices of farm goods. But they are still below the BOK’s 2 percent inflation target over the medium term.

Lee expected consumer prices to be below the BOK’s target this year and next year.

Last month, the BOK froze the key interest rate at a record low of 0.5 percent after cutting a total of 75 basis points last year amid the virus outbreak.