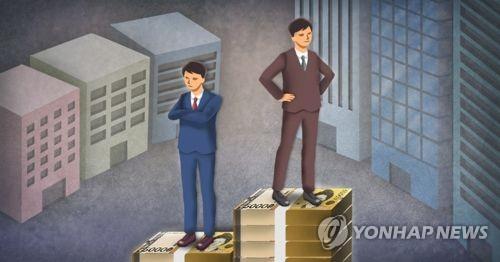 SEOUL, April 5 (Yonhap) — Nearly a quarter of companies in South Korea failed to pay the interest on their debts in 2020 despite an overall rise in corporate earnings, a report said Monday.

A total of 255 listed firms in Asia’s fourth-largest economy had an interest coverage ratio of less than 1 last year, up six from a year earlier and accounting for 25.1 percent of 1,017 businesses listed on the country’s main and secondary bourses, according to the report from the Korea Economic Research Institute (KERI).

The increase in the number of firms failing to service debts with operating income came as their combined earnings rose sharply in 2020 despite the coronavirus pandemic.

The surge in operating income was led by companies engaging in semiconductor, home appliance and other major industries, which benefited from the COVID-19 outbreak.

But most other corporations saw their operating incomes plunge last year from a year earlier in the wake of the pandemic.

In a show of deepening corporate polarization, the gap in sales and operating profit between the top 20 percent of firms and the bottom 20 percent became wider last year, the report said.

As of end-December, the 1,017 companies had a combined workforce of 1.08 million, down 11,000 from the previous year, according to the report by KERI under the Federation of Korean Industries, the lobby for South Korea’s family-controlled business groups.