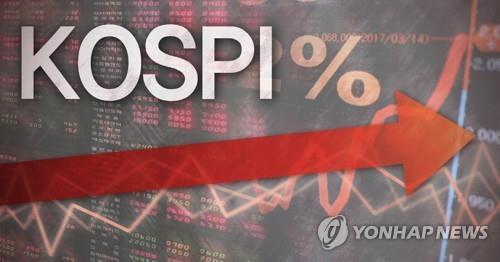 Trading volume was moderate at about 1.3 billion shares worth some 16.8 trillion won (US$15 billion), with gainers outnumbering losers 487 to 352.

The KOSPI got off to a slow start, following the Federal Reserve’s overnight reiteration that it would continue the existing support despite positive economic data.

“The recent gain (on the KOSPI) led to a mild profit-taking move,” Samsung Securities analyst Seo Jeong-hoon said. “But continued dovish signals from the Fed would eventually help build up hopes for economic recovery,” he noted.

By sector, auto and bio stocks advanced while tech retreated.

The local currency closed at 1,117.2 won against the U.S. dollar, down 0.9 won from the previous session’s close.

Bond prices, which move inversely to yields, closed higher. The yield on three-year Treasurys lost 2.9 basis points to 1.152 percent, and the return on the benchmark five-year government bond fell 4.1 basis points to 1.543 percent.